He has been playing the drums since 2007 while studying economics and marketing.

A while after he formed his first band, covering numerous rock and metal songs. At 2011 he joined forces with members of Down & Out, The Big Nose Attack, Speedblow et al. and formed Coal no More, a blues band performing live at bars and clubs of Athens. In 2012 it was time for Mock the Mankind to take shape. In the end of 2015 the first Mock the Mankind full length ruination album was released by the band and afterwards the Italian label Taxi Driver Records released and distributed the LP format over Europe. The second Mock the Mankind full length album has completed and planned to be released in late 2018. All these years he has shared the stage along with musicians from foreign bands like Ufomammut, Oranssi Pazuzu, Hexvessel, Jucifer, Jakob and with many other remarkable local bands and artists.

In search of the perfect drumstick he chose Rstick h

ickory drumsticks with his own custom dimensions. 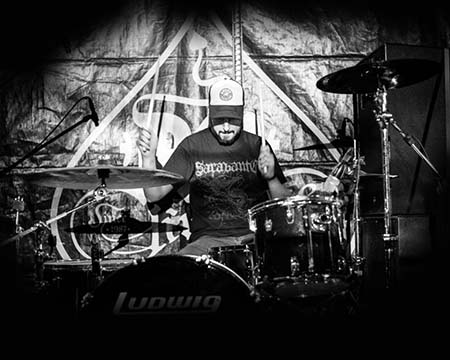 Based in Piraeus, Athens GR and founded in 2012. Genre - Instrumental Psychedelic Post Doom

Mock the Mankind is a three piece band from Athens, Greece. Formed in 2012 they decided to put their own share in the music scene through heavy doom atmospheric creations. Their inspiration derives from all the hideous and continuous disasters against any kind of living existence, that all have a common source, Man himself.