Born in Athens of Greece in 1978 in a family of musicians whose father was and still is one of the top Greek drummers. His first touch with drums was at the age of 2 by holding a pair of drumsticks in a perfect way. His father constantly took him to various rehearsals and various live shows and this was so interesting for Manos. At the age of 5, Manos started playing "shyly" the drums in a drum set at their home. At the age of 7, started piano lessons in order to have a complete musical view. During his school years he also followed music theory and drum courses in several music academies. At the age of 20 when he accomplished his army duties, start working as a professional drummer with many Greek top artists/singers and performers until now, and the last 10 years he's also a drum teacher. 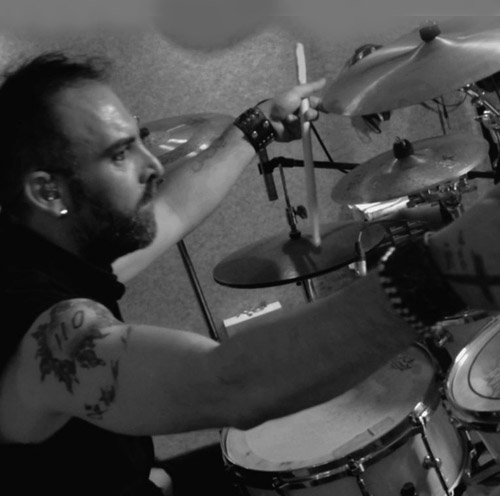 Private drum lesson via Skype/Zoom or any other platform you prefer. From my place to yours through our mobiles, laptops, desktops, etc getting closer...Now, some info about lessons way: The duration of the session is about 1h but always it depends on you and your will. The basic idea is to do our practice and some exercises on a drum pad and after that try to "transfer" them on the drum set. We're going to work together on various drum books by making also our theory lessons in order to understand music and the musicality we need to have. A drum sheet in a pdf form will be sent via email or personal message after each lesson in order to be prepared and work for the next. In case you are a beginner, intermediate or advanced don't worry cause every lesson will be like a discussion between. We can work together on some specific stuff you want or you can let me guide you through various exercises and methods I mentioned before. We always schedule the day and the time of the lessons and of course always depends on our needs, so you have to be on time. Well, if you want to start together with all these and join the lessons with me you have to know that there is one rule. It's not allowed to record, share, upload, re-produce or stream our sessions, and by join these lessons with me means that you agree with the above rule. I hope you enjoy all this and remember that always try to be better...
Custom Drumsticks