Spyros Matsaggos (Peepeace) was born on May 17, 1989 in Marousi, Athens Greece. He is a Greek drummer, and plays drums for the punk rock band Flipstar since 2012. In 2010, he began playing drums for Middle Fingers High, a Greek punk rock band.

He recorded one album with them Lift the Veil, in 2011. They also released two video clips Anthem of the Exiles and Sailing Underground, which was widely accepted by the worldwide punk rock community.After the split of Middle Fingers High, he joined the punk rock band Flipstar, in which he continues to perform until today. They have released two albums Back to Basics and Sweet Sally Toe, and are currently recording their next. They have also produced two video clips This Feeling and State of Mind. Aside his two main bands, Peepeace also played in a crust punk band Dead City Motion, from 2012 to 2014 and is currently participating in a collaboration project called Versus, a band that consists of members from different countries, who cover punk rock songs and are currently working on releasing work of their own. 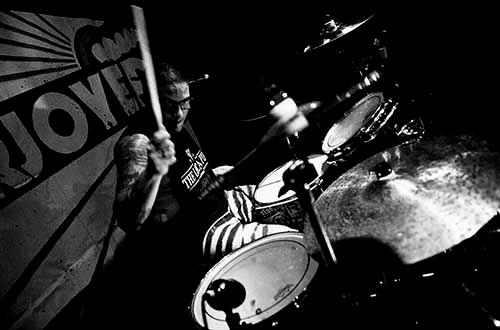 During his drumming career, Peepeace has shared the same stage with bands like the Real McKenzies, Walls of Jericho, Pennywise, Streetlight Manifesto , Less than Jale , Civet , Dog Eat Dog, Propagandhi, MxPx and others. His influences are bands from the 90s punk rock scene, as NOFX, Pennywise, Lagwagon, No Use for a Name and Guttermouth. Peepeace has attended 10 years of piano and music lessons, and has taught himself how to play drums since the age of 8 years old sneaking behind his parents back. He also has his own Youtube channel, by the name drpeepeace in which he uploads drum covers. Fat Wreck Chords referred to him as The guy who should take Smellys place, when Smelly retires, and Pennywise have featured him on their facebook page. Aside from drumming, Peepeace works as an employee in a surf shop in Athens, and as a carpenter in his own workshop. Therefore his talent has been expanded by making his own drumsticks. He is being sponsored by Monster Energy, We Ride Local clothing store, and Surf Salad surf shop and Athens Noise. Peepeace claims that Besides all the different things I have to go through every day, I still have the strength and stamina to play faster, have fun and never forget to live by the culture I grew up with, the so called 90s punk rock culture!.

The best way to find the right drumstick for you is to try different variations and see which feels most comfortable. But these are some basic guidelines will help you make your choice The history behind the numbers and letters stamped on drumsticks. The letters originally stood for styles of music, while the number was related to the stick’s diameter. The larger the diameter, the lower the number. Some of this coding still applies to today’s basic stick models. Here’s a breakdown of what the companies used back in the early 1900s, when this system was first established.The letter A stood for orchestra.The letter B stood for marching and concert bands.The letter S stood for street band. The letter D,stood for dance band. 2B is the most common size for a thick stick. 7A is the most common size for a thin stick.